Gurugram-based Delhivery is one of India’s largest third-party e-commerce logistics and fulfilment startups, with clients like Flipkart, Snapdeal, Paytm Mall and eBay. Over the last 18 months or so, Delhivery hasn’t exactly shied away from talking up its initial public offering (IPO) prospects. Sahil Barua, the company’s CEO in 2016, said, “We are ready from an IPO perspective and it doesn’t make sense to add additional capital to our balance sheet ahead of the IPO.”

Which is what the company has been busy preparing for this year, with pre-IPO fund-raising efforts from private equity investors like Carlyle Asia, and other investors like Tiger Global and Chinese conglomerate Fosun International. The e-commerce logistics market in India, which according to a KPMG report, was pegged at $0.46 billion in 2016, is expected to grow to $2.2 billion in 2020, at a CAGR of 48%.

Which is why Delhivery’s arch-rival in the e-commerce logistics space, Ecom Express, is also upping its fundraising game. The New Delhi-based company recently raised $150 million from PE firm Warburg Pincus.

What has Delhivery been up to, the last year?

In February 2017, Delhivery was catering to 600 cities and 8500 pin codes. In August, that number, as per Barua, has increased to over 950 cities and over 11,000 pin codes. But 2017 was also the year Delhivery focused on fundraising. In March 2017, Delhivery raised over $100 million from buyout fund Carlyle Asia Partners and existing investor Tiger Global. Carlyle picked a minority stake in the company. The fundraising didn’t end there. Two months later, the Chinese conglomerate Fosun International joined the larger equity financing round, investing $30 million in Delhivery. Like Carlyle, Fosun also acquired a minority stake in Delhivery. The timing is interesting, purely because the company, at least in the public domain, is positioning itself for an IPO.

In August, Barua claimed that Delhivery fulfilled 10 million orders every month “with 99% fidelity and fulfilment timelines between 30 minutes and 72 hours.” In November, Delhivery added Anjali Bansal, former senior advisor and managing director at TPG Growth to its board as an additional director. Besides Bansal, Fosun Capital chairman William Tang also joined the board in October. 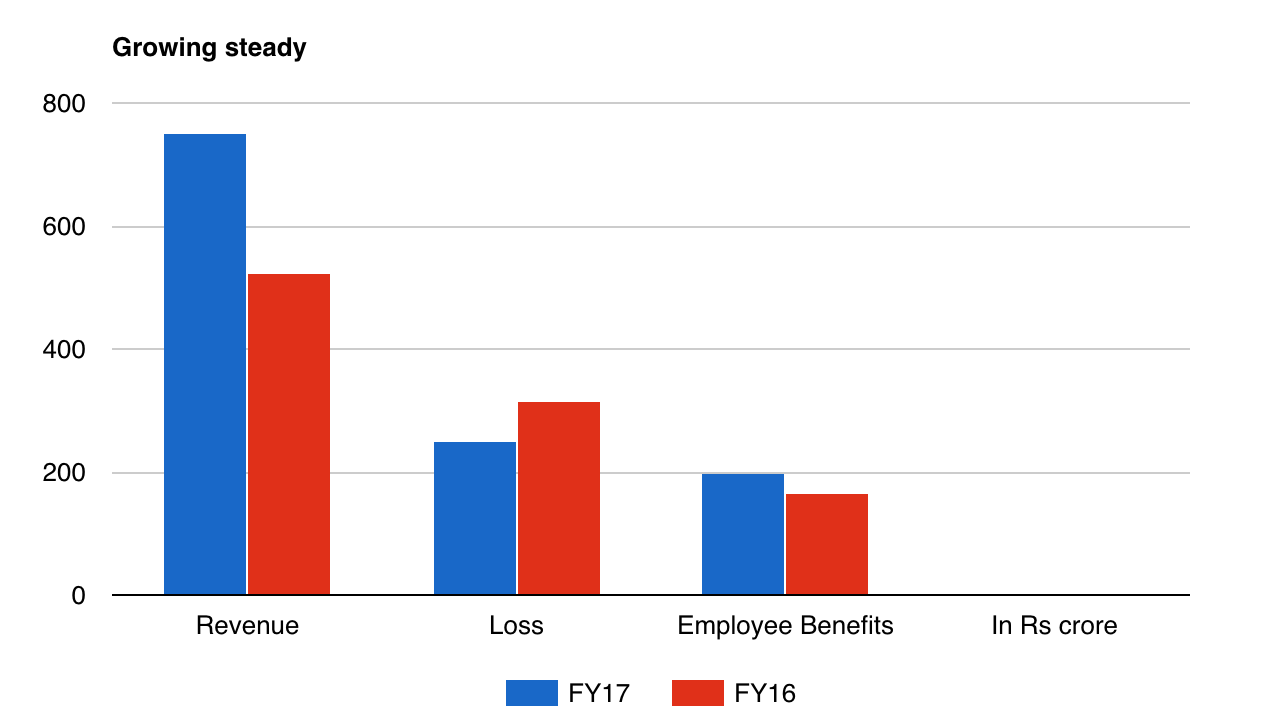 Rs 249 crore: Delhivery’s losses as of March 2017. The company has managed to bring down its losses from the previous year, which stood at Rs 317 crore. Its dreams of an IPO in India look bleak. Because no company in India can list until it has three years of profits.

Rs 473.7 crore: The company spent a significant amount of money, totalling Rs 473.7 crore on “consumption of stores and spare parts”. That expense saw an increase from Rs 406 crore from FY15-16. Read this as operating expense for the business.

Rs 177 crore: The amount Delhivery spent on employee salaries. This has seen an increase from the previous year, where it spent approximately Rs 143 crore. This reflects on the company’s expansion efforts into more cities, which would involve hiring more personnel for operations.

Barua says Delhivery’s “aim is to become India’s largest and most profitable fulfilment company for digital commerce.” The company also claimed that it would be profitable by fiscal 2018. But that may not happen, partly because growth among the other, non-Flipkart, non-Amazon type of e-commerce players (not operating at the scale of those two companies) has slowed down, or in some cases, stalled. The coming year could be pivotal for Delhivery, especially since it wants to go public. But even as it prepares to get there, it could face hurdles along the way. Like the competition, especially with global logistics giant DHL keen to expand its operations into e-commerce through Blue Dart.