Hike is primarily a messaging app. It, however, wants to become an all-in-one social app. Last year, the company became India’s latest unicorn, valued at $1.4 billion after its last round of funding in August 2016. This year, Hike has shifted its focus towards modeling its messenger product into a Swiss Army knife of sorts. Much like the Chinese app WeChat, whose parent company Tencent is also an investor in Hike. Hike introduced payments in June, in a bid to preempt Facebook-owned WhatsApp’s own UPI-based payment efforts in India. The company claims to have a user base of over 100 million in 2017, with over 40 billion messages being exchanged on a monthly basis.

What has Hike been up to, the last year?

Much like 2016, this year too has been eventful at Hike. In June, it launched UPI-based payments through Hike Wallet, with one eye on social payments. On Thursday, the company claimed that Hike Wallet had completed 5 million transactions in five months. The company has also completed two acquisitions through 2017, including Pulse (a hyperlocal social networking app by Instalively) and Creo (a hardware startup). Hike, according to media reports, has also joined Indiatech.org, a lobby group of young Indian startups and entrepreneurs.

Besides, its founder and CEO Kavin Bharti Mittal was included by Forbes Asia as part of its 30 Under 30 list. Mittal, at the India Economic Summit of the World Economic Forum in Delhi claimed, “If you look at Hike today, we are very dominant in the 15-25 years’ age bracket.”

Interestingly, the shareholding of Tiger Global in the India entity has changed. According to ROC documents, on 9 September 2017, Tiger Global Eight Holdings, shareholder of Hike Private Limited transferred 13,349,099 equity shares of Rs. 10/- each fully paid up held in the Company to Hike Global Pte Ltd. Hike Global Pte Ltd is the parent company, based in Singapore, formerly known as Bharti Softbank Holdings Pte Ltd. 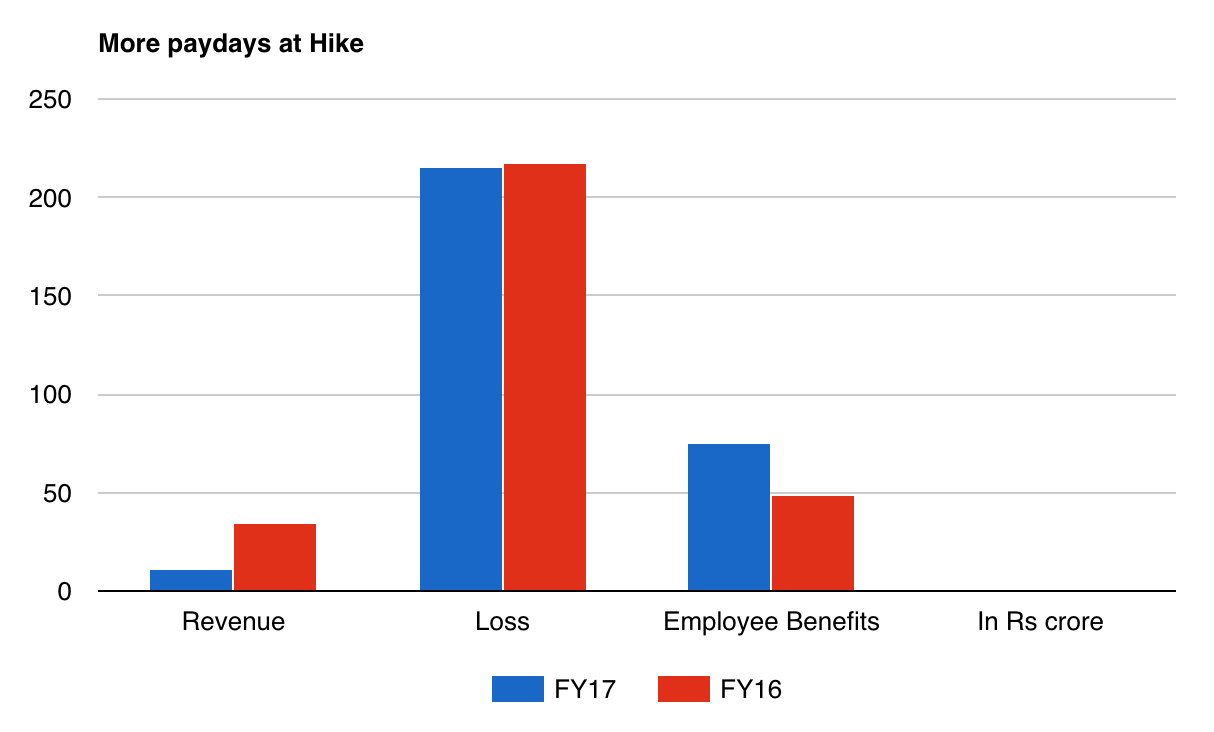 0: The revenue Hike made from operations in the year ending March 2017. In other words, it hasn’t earned a single rupee from operations. In comparison, last year, Hike bucked its own monetisation trend by earning Rs 42.3 lakh from operations, primarily coming from discount coupons (Rs 42.2 lakh) and gaming (Rs 7,901).

Rs 28.8 crore: The amount Hike spend on marketing as of March 2017. This is a significant number, given that in the previous year, it spent a whopping Rs 129.9 crore. In 2016-17, Hike has looked to cut down on marketing expenses to spend elsewhere, most notably on wages.

7: The number of Hike employees who earned an annual salary of over Rs 1 crore.

6: The number of Hike employees who earned a monthly salary of not less than Rs 8.5 lakh. In the previous year, this number was 16.

Rs 1.47 crore: The cost incurred by Hike for SMS and Activation.

Given that it has refocused itself around social payments, Hike’s biggest challenge in 2018 could come from its arch-rival i.e. Facebook-owned WhatsApp. WhatsApp is expected to roll out its UPI-based payment product in the early months of 2018. Not just that, Facebook is also actively positioning its Messenger product as more than just a messaging app in India.