The gap you can’t ignore

If there is an HR version of the Loch Ness monster, it must be that of the gender pay gap. Few say they have seen it but others rubbish it

Being transparent about salaries can identify the extent of the disparity We asked, and you answered. 1200 of you. And only about 29% of you were women. That’s not many women, but it is eerily similar to the proportion of women in the workforce. While this is not a representative sample size by any stretch of the imagination, here is what you told us: At The Ken, we all know how much our colleagues earn. No, we didn’t lose a round of Truth or Dare. It was only to assess if the gender pay gap is real.

Inspired by what Erica Baker did while at Google, we sought to explore what happens if we talk about our salaries in the open. And we asked you to talk about it as well, through the survey. Can transparency about salaries clear the air about why employees earn what they do? Can it help address the sticky issues around women’s pay?

Report after report claims that the gender pay gap is real. Just earlier this week, the Monster Salary Index said that men in corporate India made 25% more than women. Even our limited sample data points to that. 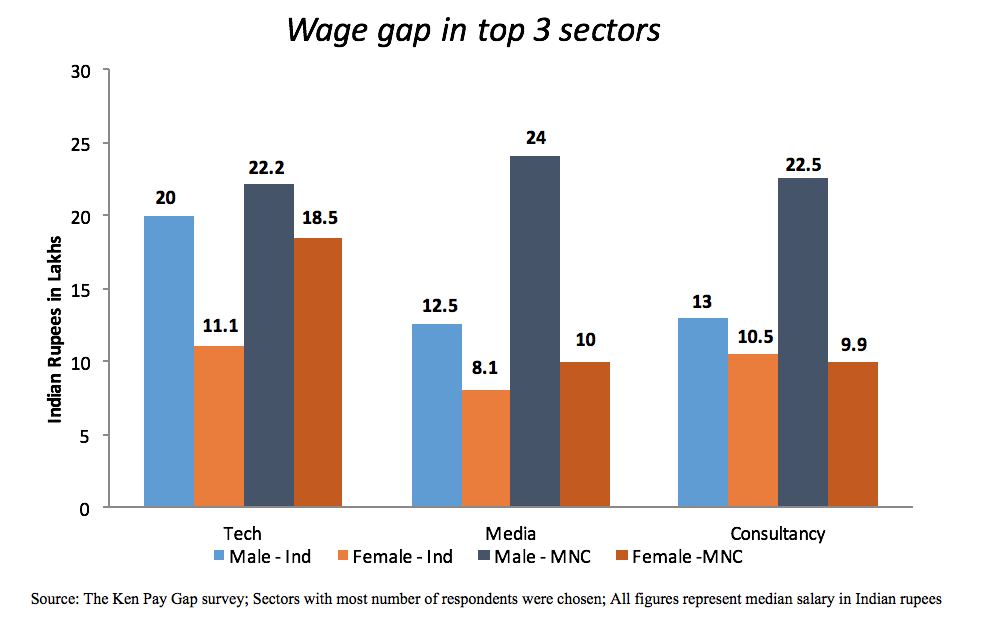 But at the same time, consultants we spoke to point out that there is no conscious bias that companies have when it comes to employees’ salaries. Undeniably, though, a slew of factors from a maternity break to fewer jobs changes, all drive a wedge between the salaries of the sexes. And then there is the question of negotiation skills, which many women grudgingly admit, they lack.

A pay gap is introduced by the choices women make. But knowing why it exists can make a world of a difference when it comes to judging whether one is fairly paid

“I was happy when I joined as an assistant manager at a salary of Rs 45,000 per month. But a month later, my friend (male) from the same business school with similar experience joined as a manager at nearly double my salary. When I raised the issue with HR, I was told that the decision was made, and there was nothing they could do. The HR tried to justify with some explanation about the relevance of experience, which was not justified as we had similar experience. It was much later that I found out that he had negotiated far more forcefully than me and ended up with a much better position and salary,” says a Delhi-based 31-year-old marketing manager at an Indian retail company.

In her last assignment, Nikita spent a few months at Network18. Prior to that, she was at Columbia University Graduate School of Journalism, where she graduated with a Masters of Science in Data Journalism. Nikita has worked at BBC World News and at The Times of India in Pune. She has a post graduate diploma in journalism from Indian Institute of Mass Communication and a bachelors in business administration from University of Pune. Nikita can be reached at first name @the-ken.com.