Before it's too late

The National AIDS Control Organisation, once applauded for curbing HIV cases in India, is now grappling with a drug-supply crisis. And at a time when the government has shifted the spotlight to tuberculosis, the other disease could rear its head again

Of an estimated 2.4 million people living with HIV, only up to 1.8 million are on Indian government's radar for now

To meet global goals of eliminating HIV by 2030, the National AIDS Control Organization has to work hard towards closing the gap of testing and treating 'missing' patients

HIV control has taken a back seat as global focus is geared on TB elimination, but NACO could learn a few lessons from the TB programme to curtail HIV

On 21 July, people living with HIV (PLHIV) began a 24×7 sit-in in New Delhi. Angry at the unavailability of life-saving drugs, up to 30 of them moved into the ninth-floor lobby of the National AIDS Control Organisation’s (NACO’s) headquarters at the heart of the Indian national capital.

“The initial response of health officials working at NACO was that of slipping into denial,” said Harishankar Singh, a leading member of the Delhi Network for Positive People (DNP+)—a community-based organisation run by PLHIV.

It is different on paper, though. With its goals mapped out, the National AIDS Control Programme—set up way back in 1992—has now entered its fifth phase. One of its main tenets is the upfront availability of at least three months’ worth of antiretroviral (ARV) medicines for people in dire need. Yet, HIV+ patients’ 42-day siege at NACO is proof that’s hardly the case.

“When the officials realised that we were not going anywhere until the supply of medication was stabilised, they slipped out of their denial and started pressuring us to move out,” Singh said. What followed was a spate of threats, including shuttering operations at NACO permanently. “It was heartbreaking to see such resistance to our basic demands of providing drugs,” he told The Ken. 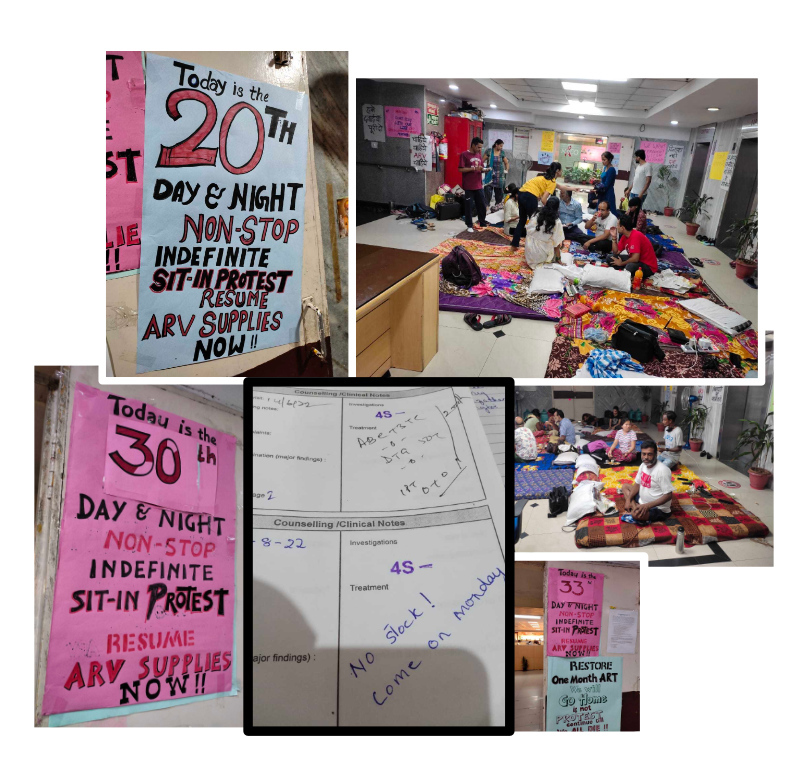 By now, even the world had started taking notice of the protest. Unable to find the drugs, the Indian government had to rely on supplies from global donors to pacify the patients. “This included emergency [drug] procurements worth Rs 4 crore (~US$485,000) through the World Health Organisation (WHO) route, and help from AIDS Healthcare Foundation and American non-profit USAID,” said a person working closely on the matter with the government. They did not wish to be named as they are not authorised to speak with the media.

While India has vowed to eliminate HIV by 2030, according to NACO’s own admission, “HIV remains a national public-health priority with new HIV infections happening at a rate higher than the desired level.” The annual number of new infections among adults has declined 48% since 2010, but still has a long way to go to achieve a 90% decline by 2030, says the National AIDS Control Programme Phase-V strategy document.

In 2021 alone, nearly 63,000 new persons were reported to have been infected. Another ~42,000 persons died due to complications arising from full-blown infection. With over 6,00,000 persons still slipping through the cracks, the virus continues to multiply.

But the spotlight is slowly shifting away from HIV in India. NACO seems to be slipping up in terms of checking for potential drug resistance and getting more suspected patients under its fold by way of frequent and widespread HIV testing.