Down the rabbit hole

Vakrangee: It is all relative

The company's auditor, PwC resigned last week, leaving behind a trail of questions. A closer inspection of its trades reveals that bulk deals may have been executed by related parties. Those related to Vakrangee’s promoter

Vakrangee's auditor, PwC, resigned after it didn't get "adequate explanation" from the listed entity

Dinesh Nandwana is, or has been, a director with people who have (through another company) done bulk deals of the Vakrangee stock over the years

Few, if any, domestic institutional investors have invested in Vakrangee

Market regulator, Sebi, earlier cleared Vakrangee in an investigation a few months ago

UPDATE: When we left off, a cloud of uncertainty surrounded Vakrangee. Its auditor had resigned, its share price had tanked almost 83% from its January peak following an endless loop of lower circuits, and institutional investors were either keeping their distance or heading for the exits. Things were decidedly grim for the company. A lot has happened since.

After oscillating between the lower and upper circuits for a while, Vakrangee’s stock saw a high of Rs 68 ($0.97)/share on 7 August after the circuit filter was revised from 5% to 20%. Five days later, on 12 August, Vakrangee announced its dismal first quarter results for the financial year—compared to the same quarter last year, net profit declined 92% to Rs 13 crore (~$1.8 million), and revenues fell 22.6% to Rs 1,011.5 crore (~$144.4 million).

Vakrangee’s stock market prospects were not helped by the news that came in the day before it announced its results. Market regulator Sebi (Securities and Exchange Board of India) ordered Vakrangee Holdings Private Ltd (VHPL) to make a public offer to shareholders of Vakrangee Ltd. This comes as a result of Sebi’s ongoing investigation into Vakrangee’s promoter holding company transactions in the years 2013 and 2014. Sebi found that during the June-end quarter for 2013, VHPL increased its stake in the company from 22.97% to 24.93%. At one point, VHPL’s stake hit 25.50%, exceeding the 25% shareholding threshold in Sebi’s Takeover Regulations. This should have triggered a mandatory 26% open offer to public shareholders. However, VHPL failed to announce the open offer.

In other news, the company has scrapped its Rs 1,250 crore (~$178.5 million) share buyback plan. In its fourth quarter filings, Vakrangee announced that it will cancel the buyback and dividend payout it had proposed back in February as it now wants to spend that money buying ATMs for its next generation gold and silver kendras.

Then, in June, when the series of lower circuits came to a halt at levels of around Rs 31/share, and the scrip started hitting upper circuits again, institutional investors like Baron Funds made a hasty exit.

Baron is a long-term investor. In fact, those are the first two words on the firm’s ‘Who we are’ page. The Ken wrote to Baron to understand why a long-term player like itself would take such a punt, but we received no response. 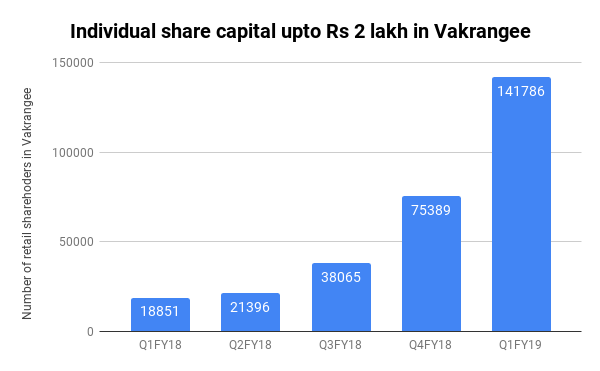 As institutional investors made their exits, retail investors were busy catching this falling knife.